This site is comprised of a series of reports which present my personal findings from the old TCM schedule data, in order to have as complete a picture as possible of their broadcast history.  I am not affiliated with TCM.


Any ideas just PM me on the forums Here or Here or now Here or Here
-MovieCollectorOH
www.moviecollectoroh.com


These pages should get updated by me once a month.

Linux for desktop computers & laptops.
[Nothing to do with TCM schedules or movies]

As of early 2016 I have migrated my Internet-connected computers from Microsoft Windows 7 over to the free Linux Mint operating system.  It has since been at least a few years and I am still happy with it.  For anyone who might be curious about the pros and cons of using a Linux distribution on their PC (a non-Microsoft, non-Google, non-Apple privacy-minded replacement operating system), here is a quick and dirty write-up I did.  This is intended to answer some very basic questions.

Also I recommend the latest version of the Firefox Brave browser (as of Jan 2021) and a privacy-minded search engine, such as DuckDuckGo.

Here is my take on the schedule, based loosely on the older monthly design, except it also includes Future Months as you scroll down. I tried to keep it simple, all available months on one page. It is set to auto-update daily.


TCM Schedules Summary
An alphabetic listing of all the features TCM has aired over their history. It is large and may take a while to open.
TCM_SCHEDULES_SUMMARY [large file: over 5MB]

Has It Been 10 Years?
A subset of the TCM Schedules Summary report.  This lists movies playing currently or in the near future which haven't played for at least ten years.
Has-it-been-10-years

Future Premieres
A subset of the TCM Schedules Summary report.
It lists features in chronological order which occur for the first time. (As per "Last Updated" date at top of report)
FUTURE_PREMIERES


Reports #3 & #4 - Movies Only, Rarities
A yearly count of movies shown less. At this time I have that set to 7x or less (rather arbitrary) just to achieve a balance, all time frames are affected proportionately for comparitive purposes. Older rarity counts are limited to their own context at the time they aired, meaning they remain accurate even after certain titles have repeated again at later dates and are no longer counted as "rare".
3)movies-only_rarities


Report #5 - Past Premieres
A yearly count of past premieres, according to year when they premiered. Feature-length movies only (45 min or longer).
5)movies-only_Historical-Premieres

Here is a Movies-only listing, sorted by last-played date (on far right of page). Movies that haven't played in a while will be towards the top, current or future scheduled movies towards the bottom. It is large and may take a while to open.
Movies Only, sorted by last-scheduled


Here is another Movies-only listing, sorted by number of times shown, then by last-played date (both on far right of page). Movies that have only played once will be towards the top, multiple times towards the bottom. Within each of those groups, they are listed in order of last played. It is large and may take a while to open. [hat-tip to stephan55]
Movies Only, sorted by times-shown & last-scheduled

These movies don't appear in my TCM Schedules Summary report, I don't have evidence TCM showed them.  This is based on the remainder of IMDB's movie data, broken down into several useful categories.

I decided not to list shorts here because they weren't always included on the schedules. Genre must not be "Short", and Duration must be 45 min or longer. [Some earlier shorts of unknown duration may be listed.]

Ordered by year, and then alphabetically within each year, to make it easier to find movies from similar time periods.


A combination of monthly website schedules, Now Playing guides and printed mailers were exclusively used for source material from TCM's earliest months and up through the month of Dec 2010.

From Jan 2011 and up through the most recent month-ending, another viewer's independent broadcast log project takes precedence over the official schedule for my source material. We still take the official TCM schedule into consideration, but ultimately use his records of what has actually been broadcast - after the fact - as his data has proven to be more accurate than the official schedule. He has been working with me closely on this project, on an ongoing long-distance collaboration, though he doesn't participate on the forums.

Current and upcoming months are each added from the online monthly TCM schedules, to be replaced each month until it gets to be the month-ending entry, then the broadcast log data is used and that month is frozen.

Data for the TCM Premieres thread on the TCM forum is reviewed by another poster (cmovieviewer) for consistency.  Go to the top of the Future Premieres report for details and his external links:
FUTURE_PREMIERES

If you wish to contact me, you can PM me here.


Below is a short list of four general aspect ratio outcomes for that I have observed, when correctly shown, as a result of transfer from one format to another over time.

All aspect ratios drawn to scale. 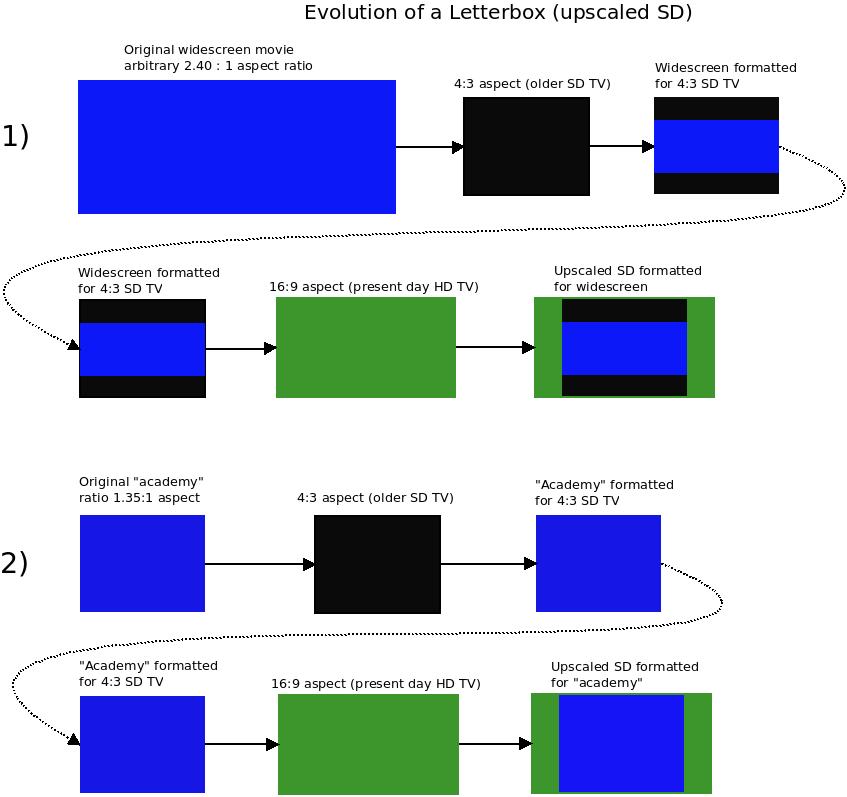 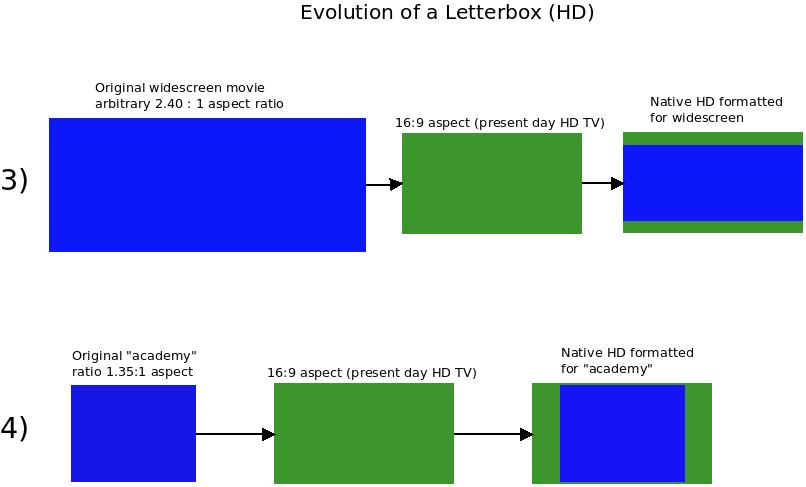 Scenario 1 presents its own set of unique problems. There is sometimes no point in "zooming" in to correct it, as the original SD resolution is low to begin with, and then it has been compressed on top of that just to fit the widescreen movie into the SD frame, so there is often not much image left to work with in the HD space. This happens in varying degrees though, based on original film AR, so sometimes it is fixable. The less change required, the more pixels you have to work with and the better the outcome.

Scenarios 2 and 4 end up being the same aspect ratio and size on the screen, but with different resolutions. 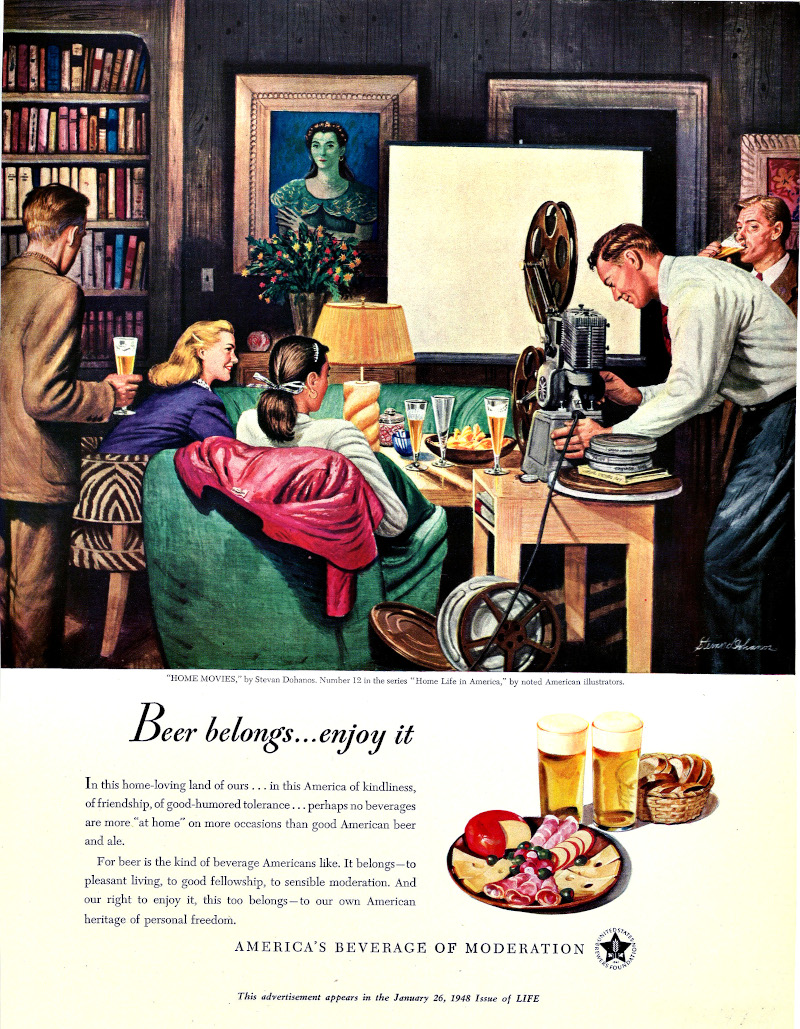